You know the classics; Super Mario Bros 3, The Legend of Zelda, MegaMan, Castlevania. They’re so beloved they made our list of top 10 NES games. But with a library of over 1000 games, there are bound to be some hidden gems in there, right? We’ve compiled a list of the 10 most underrated and overlooked NES games to be your guide to the new classics you didn’t even know existed (and some of which you can play on your Switch RIGHT NOW with a Nintendo Switch Online membership!).

Also: a reminder that we carry a wide variety of NES games in our store (including some of the options below) and are always getting new stock! Now, in no particular order:

The Guardian Legend’s legacy can be felt in almost any game that has decided to eschew a traditional 1 genre blueprint. With a combination of top down classic Zelda ARPG gameplay and vertical-scrolling shooters like 1942 and Raiden, the gameplay feels familiar but fresh even for an NES game.

Depending on where you are in the alien world of Naju, you will encounter 2 main gameplay types. On the exterior of the alien planet, you play as your protagonist, a humanoid robot sent to blow up / “Armageddon” the planet hurtling toward Earth. Not a joke, actual plot. In this form, gameplay is similar to the original Legend of Zelda or the interior portions of Blaster Master (another classic that pulls off a genre mashup very well). You explore the world trying to deactivate 10 locks so that you can activate the planet’s self-destruct mechanism. While exploring, you’ll find entrances to the underground/interior of the planet, and the game will shift into full on shmup mode, giving you a spaceship and arcade-style vertical-scrolling.

The gameplay for both feels tight and responsive, with each gameplay style worthy of being the star of their own game. This is the perfect game to try after revisiting the original Zelda for its shakeup to the formula and unique combination.

This mashup of genres would go on to inspire other games like Sigma Star Saga for the GBA. While neither concept is in itself terribly unique, the execution of styles in tandem gives for a novel and impressionable experience. 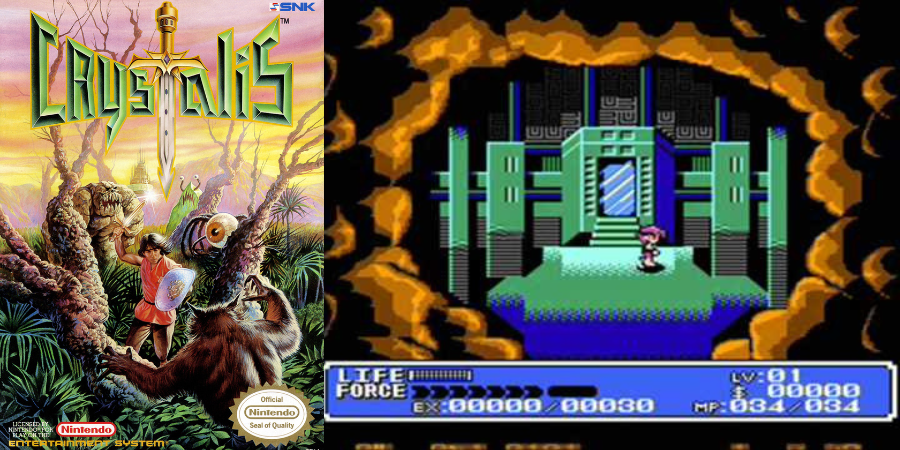 Set in a world of post-apocalyptic magic discovery, Crystalis holds its own against other ARPGs of the era like Zelda. The gameplay is fairly straightforward, exploring and fighting monsters to earn experience and level up, while collecting 4 elemental swords to combat the big bad Draygon (weren’t 90s naming conventions amazing?).

I always enjoy throwing some sci-fi in the past of a magical world (hell, Zelda even did it eventually with Breath of the Wild), as well as games that actually have some storytelling elements embedded in the game, as opposed to contained in the manual, like many games of the 80s/90s. Available on NES Switch Online, there’s no reason not to put this right on the top of your list, and ahead of your backlog, for a playthrough. 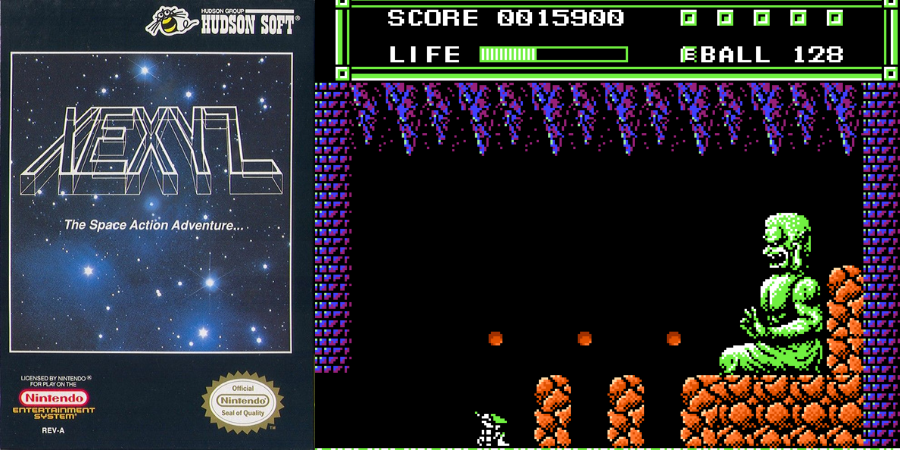 A personal favorite of my childhood, which apparently no one else I’ve talked to has heard of, Xexyz is another genre-bending trip. You alternate between Mario-style side-scrolling platformer levels and horizontal-scrolling shmup, with gameplay similar to R-Type or Gradius. You can find item shops throughout to upgrade your abilities, using unfortunately named currency in the form of “E-balls” (I’m not 12 you are shut up).

The platforming is fine, though it can feel a little too responsive or almost jittery at times making for inaccurate jumping, but thankfully it's an easier platforming endeavor. It’s no Mario, but very little accurately captures that sense of leaping through the air you carry in Mario games. The shmup sections feel solid and satisfying to overcome the bosses. The almost cinematic transition to weird alien boss fights can be jarring but helps to shake up the gameplay. Overall, a fun and weird tangent to take when you need something just a little different than the classics. 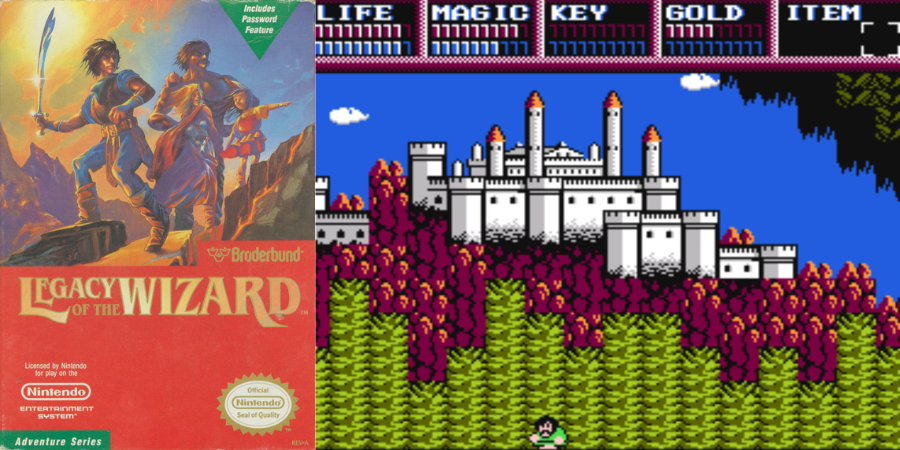 One of the earlier lesser-known examples of an open world ARPG/Platformer (Metroidvania anyone?), and part of the Dragon Slayer series in Japan (which actually predates Zelda and is considered one of the progenitors of the Action RPG).

You play as a number of characters (the Drasle family), sending one at a time down into the labyrinthian dungeon to defeat an evil dragon trapped in a painting (you know, pretty typical NES game plot). Family members all have unique characteristics and abilities, and you need to use all of them to successfully navigate the entire Labyrinth, gather all 4 crowns to access the final area, and finish the game.

A novel take on the ARPG formula, this is definitely not one to miss if you enjoy getting lost in an NES fantasy for a while. 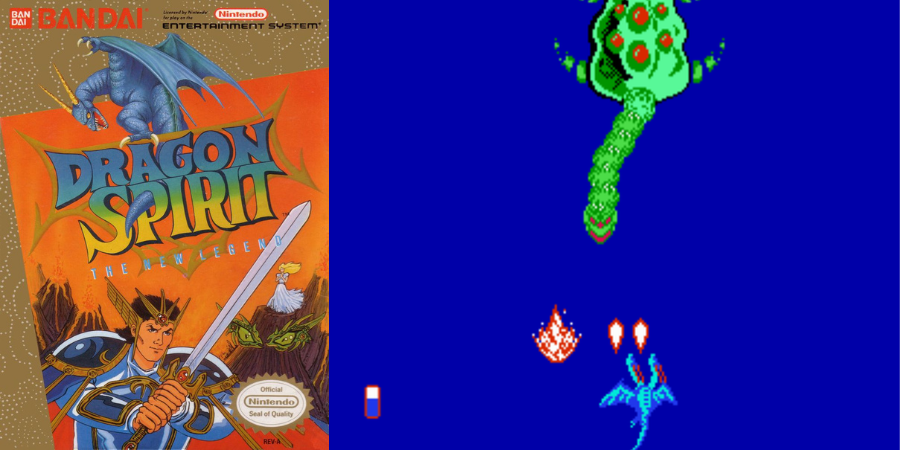 This is going to be real straightforward. Have you ever wanted to play 1942 but as a dragon? Done. Dragon Spirit: The New Legend is a sequel to the arcade game, Dragon Spirit, where you control a dragon shooting fireballs in the format of a vertical scrolling shmup. I don’t know how many ways I can explain this, but you get to be a dragon instead of a plane and shoot fireballs instead of bullets. Gameplay is standard fare for the time and it appears to be a fairly faithful arcade experience. An arcade classics version of the original Dragon Spirit is available on the Switch and PS4 as a download, so I don’t know what you’re waiting for. 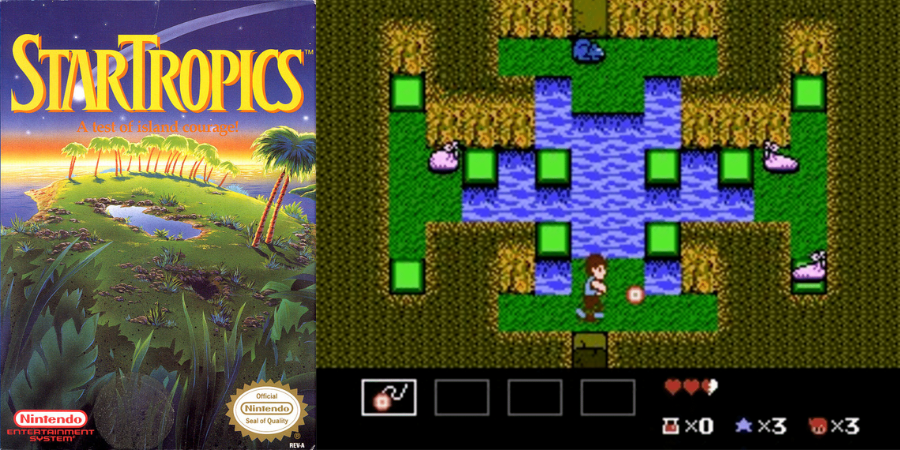 So some people don’t like Zelda II and that’s fine. It’s definitely a weird entry in the series. But what you may not know is that StarTropics runs on the same engine and is a vastly different game. You use the same overworld mechanic but when you enter dungeons you get a much more traditional Zelda approach of a top down, room-by-room, fight the monsters and solve puzzles experience. You play a teenager named Mike Jones who really loves baseball on a trip to visit his uncle Dr. Steven Jones in the “South Seas”. You use a Yo-Yo as your primary weapon (because it was the 90s and baseball and yo-yos are so closely intertwined), and you embark on an adventure full of talking animals, submarines, and even aliens in order to find your uncle.

It’s a unique take on the Zelda gameplay formula with a definitely weird setting, and an infamous puzzle that at this point requires you to google the solution (the original came with a letter that actually had to be submerged in water to reveal the answer, which is really cool, but obviously you can’t do that with a digital copy). Worth a visit if you haven’t experienced this trip of a game, and it’s available on the NES Switch Online. 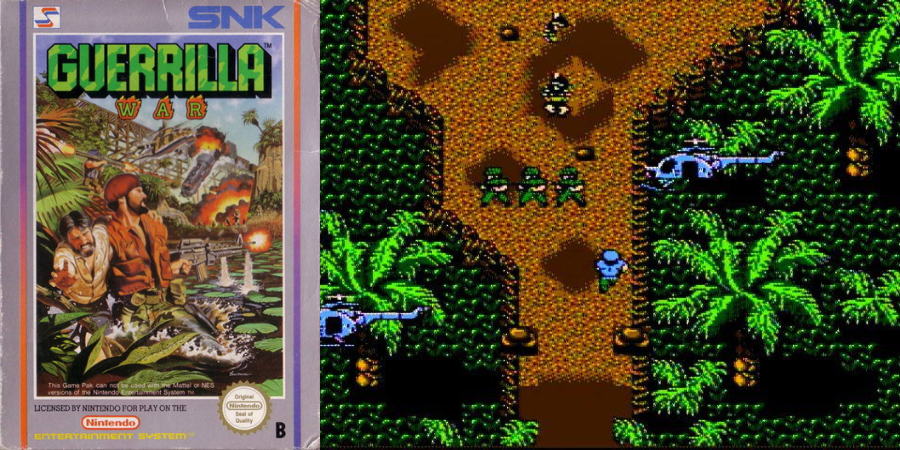 Imagine this; Ikari Warriors top down 8-way shooting action, but you play as Che Guevarra chronicling the Cuban Revolution, with 2nd player sidekick Fidel Castro. No, this isn’t a fever dream, and it’s not a bootleg version of Ikari Warriors itself. This is the actual original premise of Guerrilla War (which is actually titled Guevara in Japan for the Famicom release). Solid run and gun action, a blast with 2 players, and not to be missed if you have a way to play it (it is available via Arcade Archives on Switch to download). 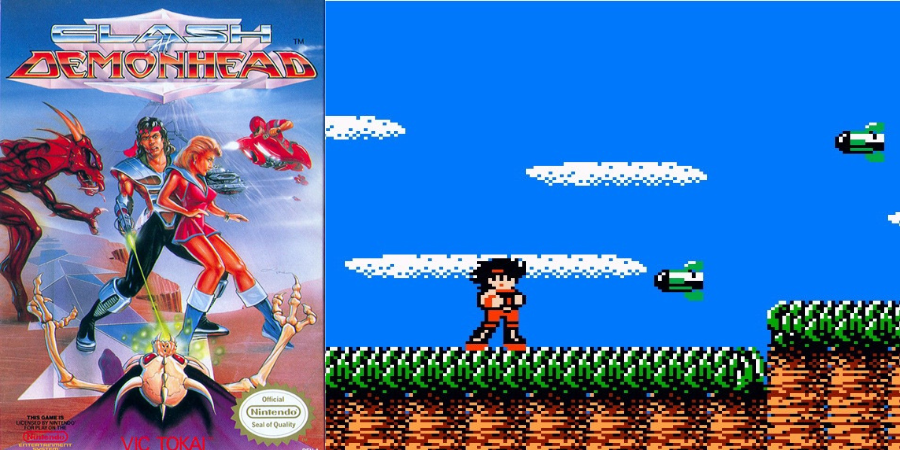 One of the earliest examples of an open-ended platformer, Clash at Demonhead provides players with the ability to revisit previous levels and requires exploration to progress. There is no clear progression of stages, and you earn money to spend in shops for upgrades as you run, jump, and gun your way through levels. It also eschews the traditional left to right platforming in favor of route-dependent directions; one of the first examples of a truly bizarre right to left platforming that is also seen in Zelda II. With solid platforming and an actual story to be told in game, this is definitely a title you should visit if you remember hearing the phrase uttered in Scott Pilgrim vs The World and thought “wait, what is that?”. 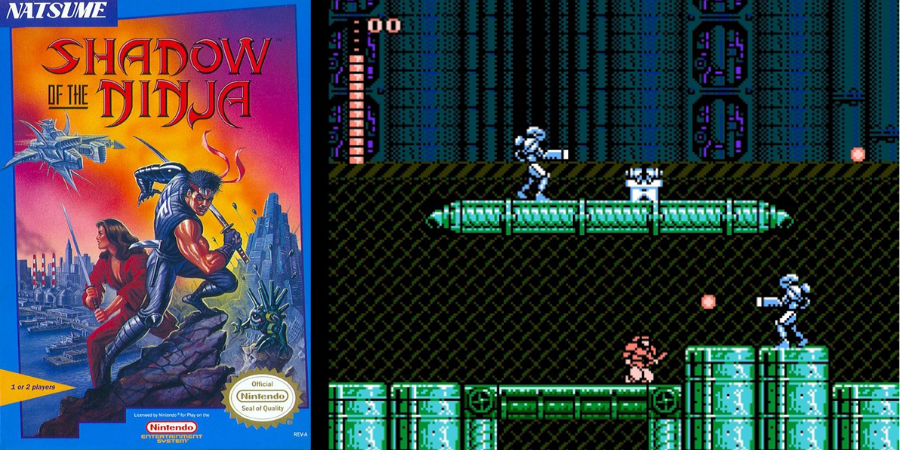 Shadow of the Ninja could be seen as a Ninja Gaiden clone (in fact, a GameBoy port of the game was developed, and after acquiring the rights, was eventually named Ninja Gaiden Shadow). The gameplay differs from Ninja Gaiden in a few ways; the main weapon changeable between a katana and kusarigama (for additional range), and there are secondary weapons available in the form of grenades and shuriken. The mobility of your character is also notably more diverse; you can hang from platforms and flip up onto them, similar to Contra, providing a refreshing change from the very linear run and jump of Ninja Gaiden.

You are also presented at the beginning of the game with a choice of characters, the ninja Hayate or the kunoichi Kaede. The game is also playable entirely in co-op with one player controlling each character, in what is alleged to be the “first male-and-female team” in the history of video games. The addition of a playable female character with no functional difference from her male counterpart is a welcome sight, as is the lack of her being overly-sexualized (a problem still prevalent today).

A great co-op experience, take an afternoon and play through Shadow of the Ninja with a friend; it’s available on NES Switch Online. 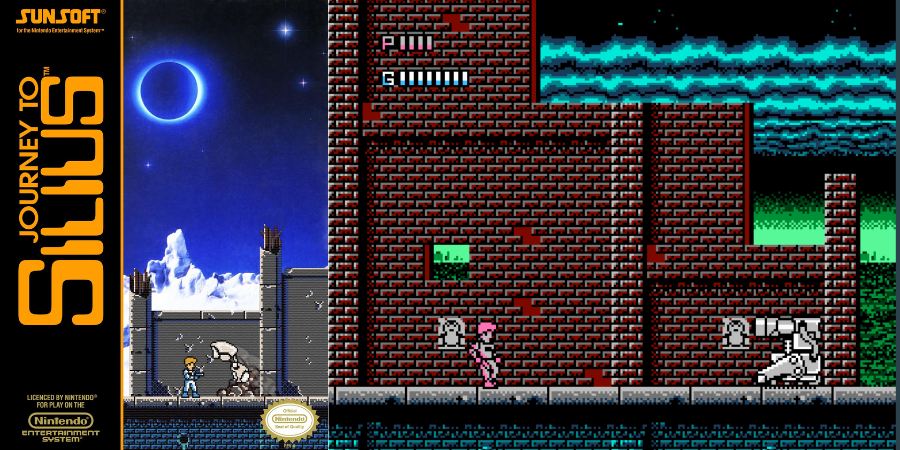 Journey to Silius actually began as a Terminator licensed game, before SunSoft lost the licensing. They changed the details enough, but you can still see the definitely mechanical skeleton of the source material underneath. From the dystopian landscape to the enemies you fight, you can tell that this is a love letter to James Cameron’s 80s masterpiece, and once you know that, you can’t unsee it. With an arsenal of 5 weapons to collect and just as many stages, veterans won’t have a hard time blowing through the game in an afternoon, but it’s the parallel trip down memory lane that is familiar but not-too-familiar that makes it worth it. Journey to Silius is available on NES Switch Online.